What do you do when you make a mistake? A mistake that you know goes against what God has done for you? When that mistake feels more like a sin, than a oopsie!

I feel that my heart is pricked. I feel so ashamed and heavy. If you are wondering what I did, well I got drunk. So drunk that when I began to remember my behaviour the next morning, I was thoroughly ashamed of myself. Now I don’t believe that drinking alcohol is sinful or that you can’t enjoy yourself with a few drinks. The problem was that I found myself behaving like the old me. The loud, argumentative, obnoxious, bossy and insensitive old me.

In the morning when I met up with everyone, they were all laughing at me and telling me it was my fault that everyone got as drunk as they did. Which is true because I was plying everyone with shots of jagermeister, which is something I would never usually drink, if I was not already pretty far gone. Again, I am not against having a good laugh and even having people teasing me but, this time it was different because I knew that my behaviour did not reflect the fundamental change that has taken place in me, I was acting like the world. The people I got drunk with were friends and family but they also don’t know the Lord and I just had a profound sense that being like that does not lead others to know Jesus for themselves.

I prayed and asked for forgiveness. I acknowledged that I have this urge to be like everyone else, when I know full well that God calls me to be different, to stand apart from the crowd.

This morning, I read Psalm 103. It was an amazing reminder that,

8 The Lord is merciful and gracious,
slow to anger and abounding in steadfast love.
9 He will not always chide,
nor will he keep his anger forever.
10 He does not deal with us according to our sins,
nor repay us according to our iniquities.
11 For as high as the heavens are above the earth,
so great is his steadfast love toward those who fear him;
12 as far as the east is from the west,
so far does he remove our transgressions from us.
13 As a father shows compassion to his children,
so the Lord shows compassion to those who fear him.
14 For he knows our frame;[a]
he remembers that we are dust.

It does not by any means excuse my behaviour but it does remind me that the Lord is so kind to me even when I stumble and make a mistake. That he knows me and my weaknesses. That staying in the feeling of guilt and shame is not right also. I am the type of person who will relive it again and again, agonise over it, cry over it three months later and it comes back to me even years later bringing fresh anguish. I am so glad that is not how God calls us to live. 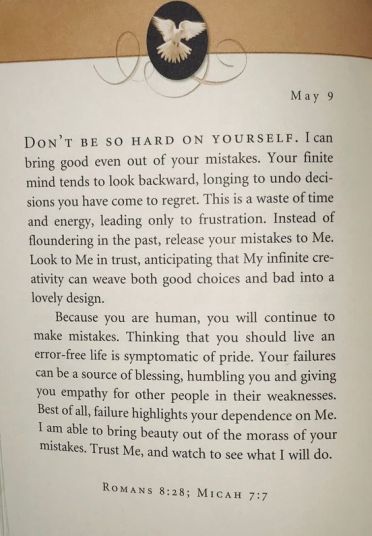 So, this is the hardest part for me, I have to forgive myself. I have prayed that by the power of the Holy Spirit I will not make the same mistake again, that I would remember this experience and it would guard me  for the next time I am in a similar position. It does not mean that I will never drink alcohol again, or refuse to go to parties but I would exercise self-control and know when I am approaching my limit and stop there. Also, because I have kids, hangovers take far longer to pass now than I ever thought they would.

I found this on pinterest and it helps me to take a deep breath and release the mistake I made to the only One who use it to teach me.

If you are like me and struggle to let go of your own mistakes, remember this: 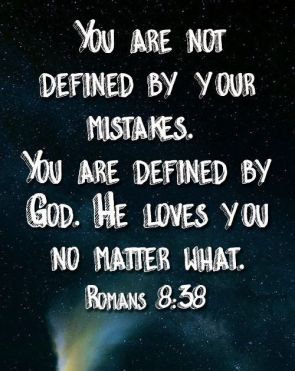